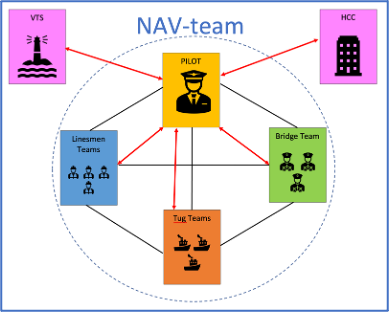 This paper aims to explore the possibilities of improving team performance on the bridge in pilotage waters. In Bridge Resource Management, the integration of the pilot in the bridge team is an issue open to discussion. In this paper, the pilot will NOT be considered part of the bridge team for several reasons: He is not familiar with the bridge layout, nor is he familiar with the bridge team. Finally, the formal (legal) framework is much different for a pilot than for the captain, officers, and crew of a ship. However, this does not stand in the way of a successful collaboration. The pilot and the bridge team have a common goal: to navigate the ship safely and smoothly.  With the introduction of the term NAVteam, the actual course of events onboard is outlined as it is in practice in pilotage waters. This also opens the possibility of adding the other teams involved in navigating the ship, such as linesmen, port authorities and tugs. They all share the common goal. From the architecture of this multi-team, recommendations are made for optimal functioning by means of a so-called team Effectiveness model.

The team involved in navigating a ship will be called NAV-team. A general definition of a team is: A group of people with different skills and different tasks, who work together on a common project, service, or goal with a meshing of functions and mutual support (washington.edu, 2021),P.1.  The goal of the NAVteam can be formulated as follows: “To navigate the ship safely and smoothly into or out of port in the most efficient way”. It is assumed that the ship is subject to compulsory pilotage and will use tugboats and linesmen in the process.

From the above, it is clear there is a multi-team, which is self-managed because of various characteristics, such as the autonomy of all teams. The pilot is not part of the bridge team in this structure. Figure 1 shows the architecture of the NAVteam. All communication is depicted by red arrows.  The pilot plays a central role in all forms of communication.

Figure 1: The architecture of the NAV-team

In  (Robbins et al., 2017), P.279 the team effectiveness model is defined (figure 2). To improve the effectiveness of the NAV-team, all components of this model will be considered.

Suggestion 1 for improvement: Pilot is to send his proposed voyage plan and planned use of additional services (tugs and linesmen) to the ship and tug and linesmen operator. This may include meteo data to support his advice. This is done to avoid delays in passage time because of lack of resources (Tugs and linesmen)

Leadership and structure: In a multi-team environment as described here, there is not one person or team that can be appointed as leader. When a ship is under pilotage, roles and responsibilities are generally well established. Every team has its own safety- and operational restrictions. A good understanding of these restrictions is needed by all teams, and they should therefore be established before the operation takes place. Every team must respect each other’s position.

Suggestion 2 for improvement: It should formally be established at what point the captain or the pilot has the conn of the ship.

Climate of trust: The NAV-team is formed on an ad-hoc basis, making it impossible for team members to get to know one another before and after an operation takes place. Mutual trust will therefore mainly be based on perception, reputation, appearance, and professional and personal behavior.

Suggestion 3 for improvement: Professionalism is the key to success.  Never be unprofessional, whatever the hour of day, or whatever the task may be.

Performance Evaluation and reward system:  Evaluation hardly ever takes place upon completion of a voyage of a ship. Most of the times, pilot, tugs, and linesmen are off to another job very quickly. It would however be beneficial to all players in the process to evaluate a ship’s navigation, especially when problems or unexpected events have arisen.

Suggestion 4 for improvement: A pilot should initiate the evaluation or debriefing of each voyage with the ship’s master. Whenever needed, tugs masters, linesmen, VTS-operators could be involved as well. This can be done on an informal basis. A just culture must be in place to achieve this.

Since the NAV-team is created on an ad-hoc basis, the abilities of the team members stem from the reputation, certification, and experience of previous cooperation with these parties. Personalities, and team member preference play a very minor role. Diversity is guaranteed by having experts from the ship, the pilots, tugs, and linesmen available. The size of teams is discussed before the operation between captain and pilot. The finalcomposition of the NAV-team cannot be influenced easily. The nature of the voyage, determined by the ship’s properties and dimensions, the fairway dimensions, the meteorological conditions, the berth layout, and the availability of resources make up the composition of the team. Each team member is dispatched by their own organization to the job at hand on very short notice. E.g., a tugboat operator will dispatch the tug that is most suitable for the job, within the required time frame, fitting into the schedule of the tug. The same goes for linesmen and pilot.

Suggestion 5 for improvement: Team composition information should be shared between all separate actors to manage the expectations of all involved. This can be done using an electronic means of communication in a port community system.

The Common plan and purpose should be clear from the start: to navigate the ship safely and smoothly into or out of port. The specific goals are set for each participating team. E.g., linesmen are to set the mooring lines in cooperation with the ship’s mooring gangs in a specific predefined order. At the same time the tugs are to perform their duties in their own, well-orchestrated manner. These goals should be communicated by VHF in a timely, unambiguous manner. In this way, a shared mental model emerges, which allows all teams and team members to understand their duties well in advance. As a result, possible task conflicts will come up before the operation takes place and can be discussed and resolved.

Suggestion 6 for improvement: The pilot is to communicate all process details in a concise, unambiguous manner to all teams in a timely manner. Suggestions of all teams should be considered, and possible conflicts should be resolved before an operation takes place. 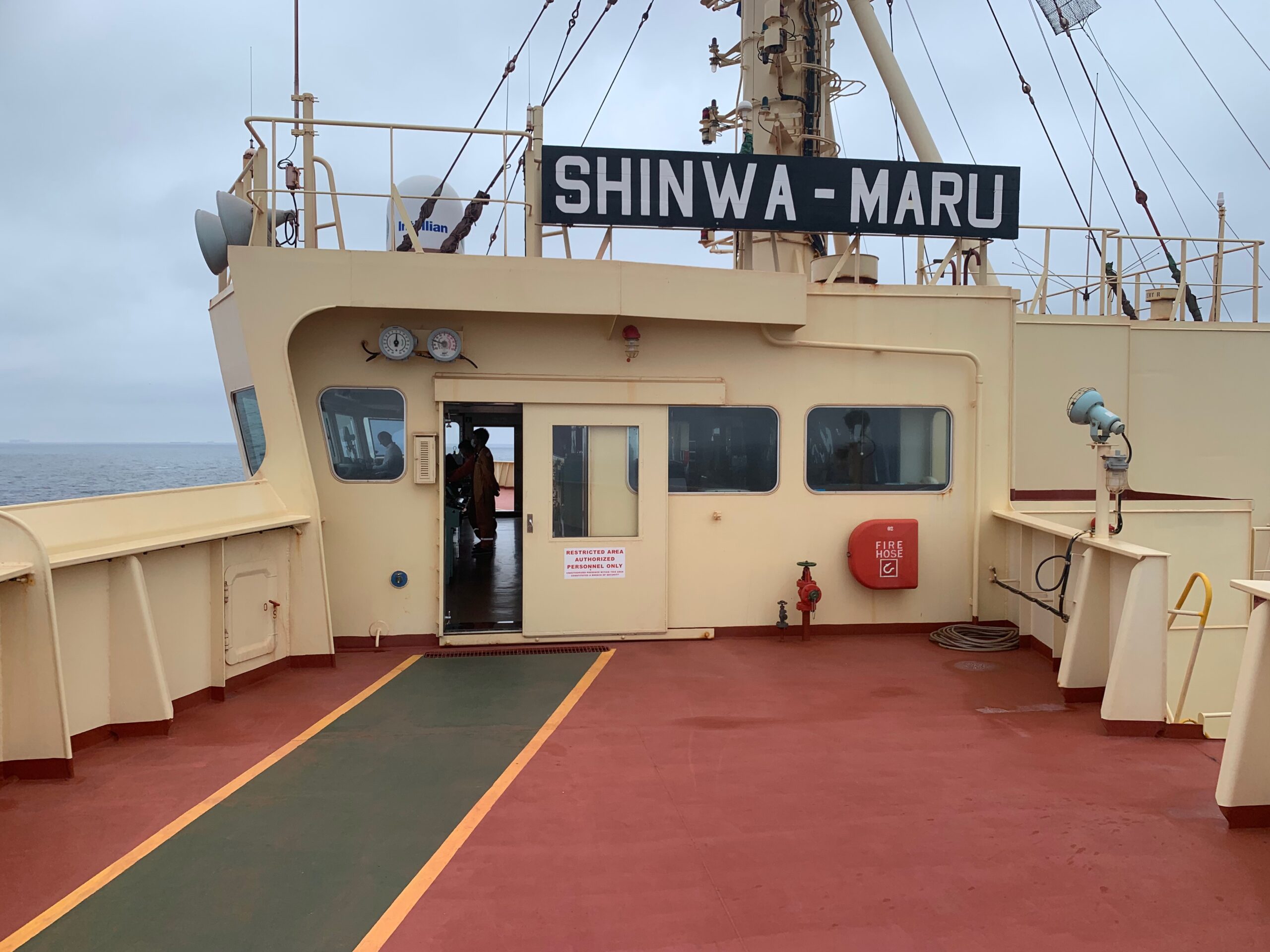 On july 1st, the 327 meters long bulk carrier SHINWA MARU entered Port of Rotterdam with 20,6 meters draft, underway to EECV terminal at the Caland channel, Europoort. Due to 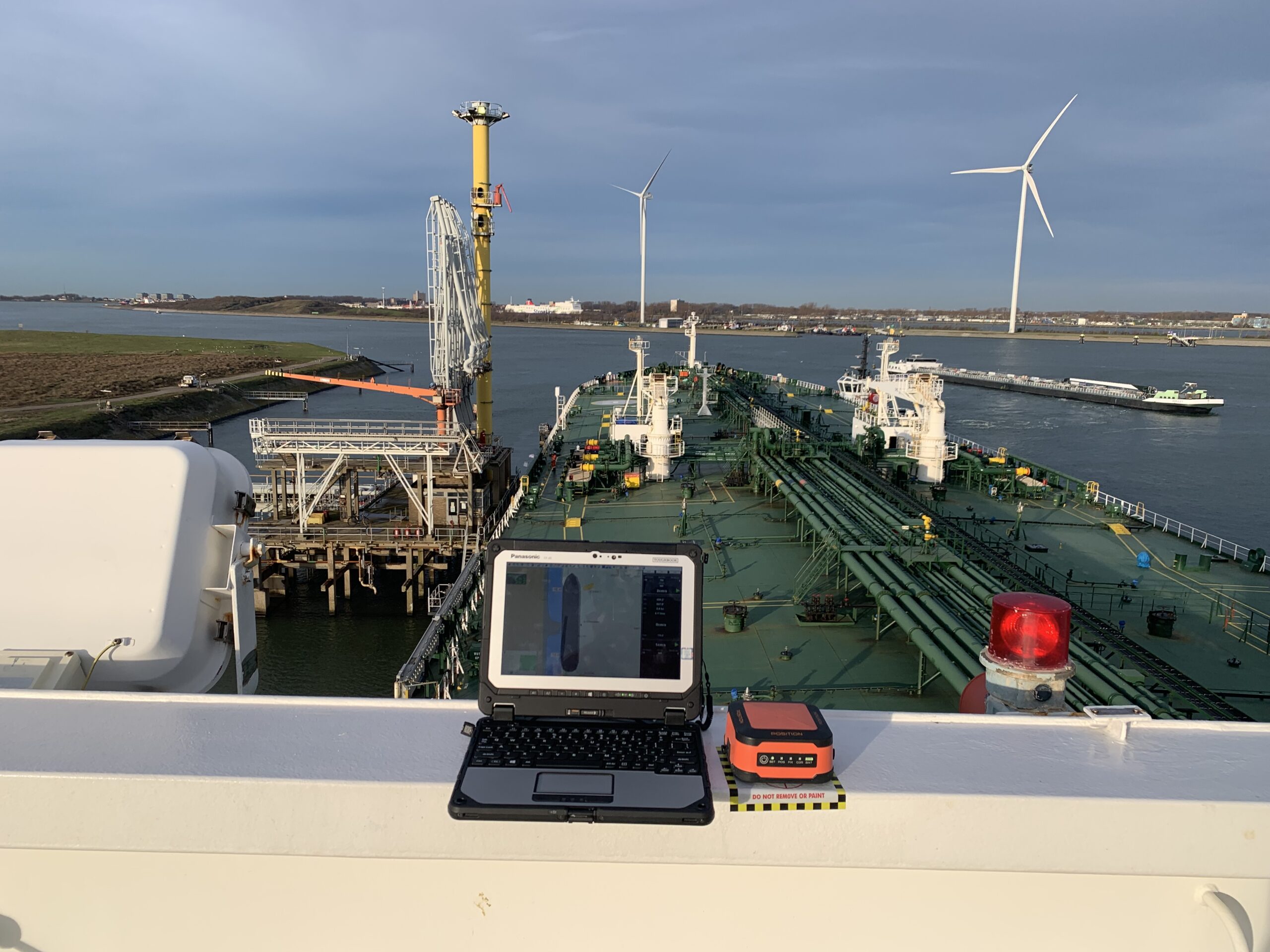 On January 6th, 2023 the 250 m long CRUDESUN was inbound with 13m draft. Two tugs were used for bringing this lady safely alongside to Shell 103 in Europoort.